In light of the latest recommendations on the COVID-19 situation by the Ministry of Health with regard to elderly and immune-compromised, recommendations by the National Committee and in consultation with some of our members we advise the cancellation of all MX5 Club events for the foreseeable future.

While driving our MX5s is probably one of the safest activities that could be undertaken – good ventilation, good separation distances – the gatherings before and after our runs could be of concern to people, both members and on-lookers alike.

Let’s hope that the controls NZ has put in place prevent any domestic person to person transmission of the virus and we can get back to normality sooner rather than later.

See samples below of Regional Run Reports from previous months.

We hold a run on the 2nd Sunday of each month.

Facebook pages are maintained by some Regions. Open pages are visible to all. Closed Groups are for MX-5 Club Members only. If you are a Financial Member, regional coordinators are happy to accept your request to join a page by answering a couple of questions.

See details below for each Region.

Runs are usually 4th Sunday of each month.

Please use the Run Events Submission Form at bottom of this page to add details of your upcoming events.

Coordinators are your primary contacts for information about planned events and activities in your region. 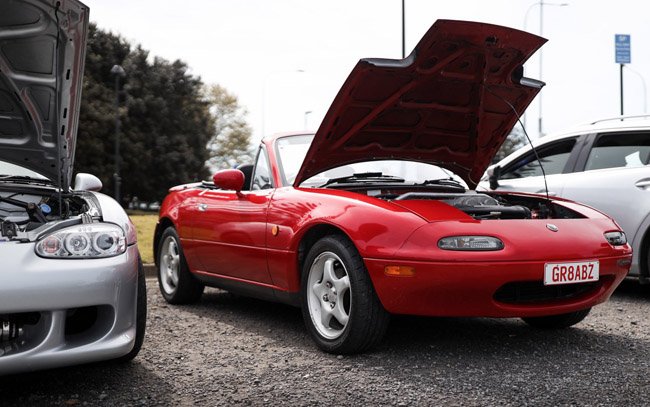 After so many days of wet and wild weather it was great to wake up to a calm, sunny morning for our Show and Shine.

This latest event had been a long time in the planning after deciding not to return to our usual venue of Okahu Bay. We had almost secured a spot at Botany Town Centre before the management advised that they were going to undertake a major redevelopment which would take the usual staging area out of commission. Fortunately, through Club member Graeme Banks’ connections, we were able to book a space at Smales Farm, the venue for the very popular monthly Caffeine and Classics meeting.

As 2019 is the 30th Anniversary of the MX5, we decided to make this the theme for the show and put out a call for as many NA cars as possible to come. As a counterpoint, we had a 30th Anniversary model RF ND belonging to new member Leon Barton. Marilyn Harp, Ron Bol and myself arrived bright and early to set up the area for the various models – NA, NB, NC, ND and Modified. Fortunately, being a car park, the area was conveniently marked out, making our job much simpler.

While the official opening time of the event was 10am, typical of the enthusiasm of MX5 owners, cars started arriving in their droves by 9.30 and Marilyn was kept busy collecting people’s $10 entry fee/charity donation to the Auckland Rescue Helicopter Trust. By 10.30 the place was packed and there were people everywhere inspecting the various incarnations of MX5, many of which Mazda had never envisaged when they built the first cars. In addition to some beautifully looked after stock NAs, there were numerous turbocharged cars, one supercharged and two V8s. One of the V8s was fitted with a Lexus motor, with a turbocharger in the boot just to give it that extra edge!!!!. Mazda Motors only ever made a very small number of NB Coupes, and we are lucky enough to have two in New Zealand, one Type A and one Type S.

To eliminate any bias, we have always used an independent judge in the person of Barry Watkins from Westpac/ARHT, and he was good enough to come along again this year.

As usual, Mazda New Zealand were most supportive of the event and provided enough goodies for us to be able to award prizes for both the winners of each class and the runners-up.

After due deliberation, and in some cases a lot of head scratching, Barry came up with a list of winners:

After all the prizes had been handed out we finished the celebration with a suitably decorated cake, beautifully made by Brenda White. She said she wasn’t going to take any of it home, so many people came back for seconds. 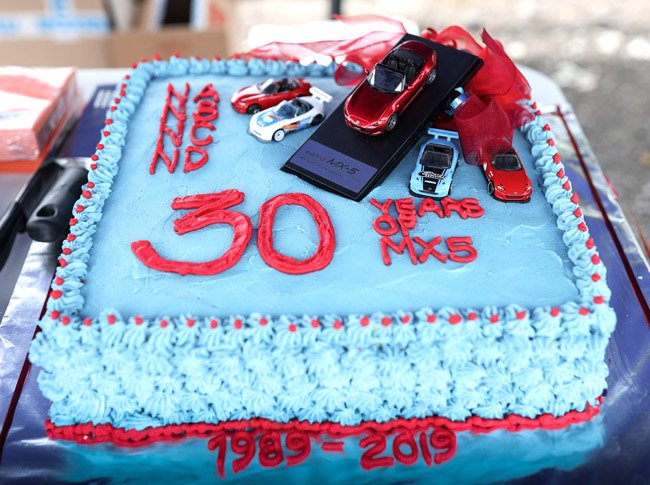 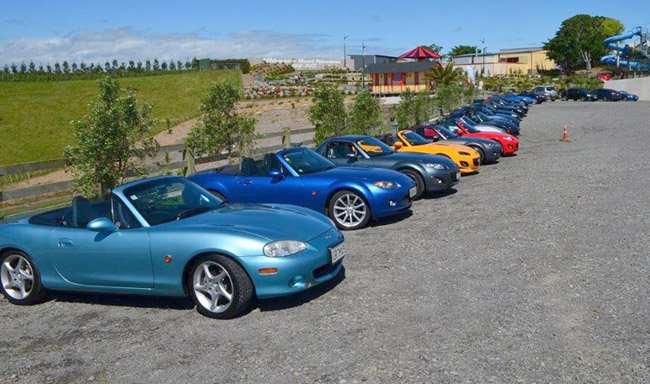 Nine MX-5s lined up at our usual meeting place under a cloudy sky but an assurance from me that we were in for good warm weather as we made our way up to Maramarua to meet up with 3 more cars.

So off we set on backroads throughout the north east Waikato that our last Coordinator Dennis Crossman admitted he hadn’t ever been on before. On our scoping run we had encountered turkeys, pheasants and even a stoat run cross the road in front of us. I swear that we waited for the same livestock in the same places, to cross the road again in front of us.

We finally arrived after an uneventful run at the Red Fox Tavern where we met 2 of our newest members along with Garth from Pokeno. Good to see Garth again as he has missed a couple of our last runs after having broken his ankle in a work-related incident.

One of our new members Bruce had only just purchased his car a week before – a very well presented and immaculate NA in Red. Looking around we now had 12 cars and 5 were NAs and 5 were red. After a small rest and the inevitable toilet stops we lined up to wend our way to Kaiaua. On this leg we were all reminded of the importance of keeping our following distances as two cars had to “smoke up” the wheels to avoid a tail ender with the car in front. (Acknowledgements go to Wendy and Tony for their fast reactions and impressive smoke screens.)

The meal at Kaiaua Hotel was to the usual high standard and after lots of chatter and banter all were finally “prised” out for the run up to Clevedon through the Hunua Ranges and down to Mercer for a coffee break.

Good to catch up with Colin and Marilyn. Colin has been struggling with his health of late so it was good to see that any present issues were not going to hold him back from what he loves doing … go Colin! The scenery on this leg of our run is best described as spectacular.

Andre and Suzette who are from South Africa and 2 of our newer members commented that some of the scenery we encountered was a reminder of just how beautiful NZ is. It also reminded them of a particular part of SA that they had always enjoyed travelling to.

The road up to Clevedon and down to Mercer is “custom” made to enjoy the handling qualities of the MX-5 no matter what model we drive.

It also reminded me that I needed a new set of tyres on my NC. There has been a lot of talk regarding suitable tyres of late but we took the advise of Dr Don McLean on what he thought were a best choice. Knowing that Don has forgotten more about MX-5s than I know his sage advice was welcomed.

We are now wearing a set of Bridgestone Protenza 215/17 re003 tyres. The car now corners like a “worm on sandpaper” and the handling is a totally different ride … thanks Don.

On the run to Mercer we temporarily lost Wendy, our newest member, as she had stopped due to a slight overheating problem. Welcome back to the Club Wendy. We talked her into rejoining and ironically it was Wendy that talked us into joining back in 2004. 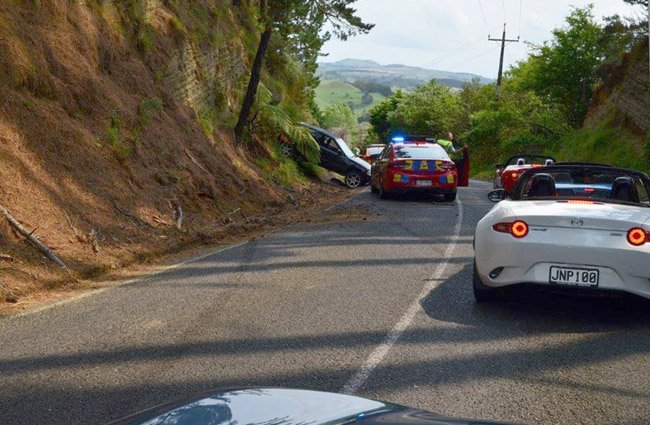 It was just as well we had a five minute wait for Wendy to catch us up as we could have been horribly caught up in a big Police pursuit. On the back road to Mercer we came around a blind corner to see a pretty knocked-up car backwards up a bank. Two police cars and a handcuffed individual being manhandled into the back of one of the police cars. It appeared the driver had tried to outrun police cars and lost control around a sharp left hand corner.

Five minutes earlier and that pursuit would have come up behind us and who knows what could have eventuated.

Finally made it to Mercer and the talk over a coffee was centred around the “ what ifs “ in relation to the police pursuit. After coffee we all went our separate way back to Hamilton. Brilliant day, brilliant weather, brilliant company … thanks to all that participated.

See all the other Run Reports in the latest issue of the MX5 CLUB’s TopDown magazine.